That crowd at The Lido Theatre in Fort St John BC was out of this world!! You guys completely rock and you are super. We will be posting videos and more pics soon. On to Grande Prairie this Sept 15 and 16 to rock BETTER THAN FREDS. 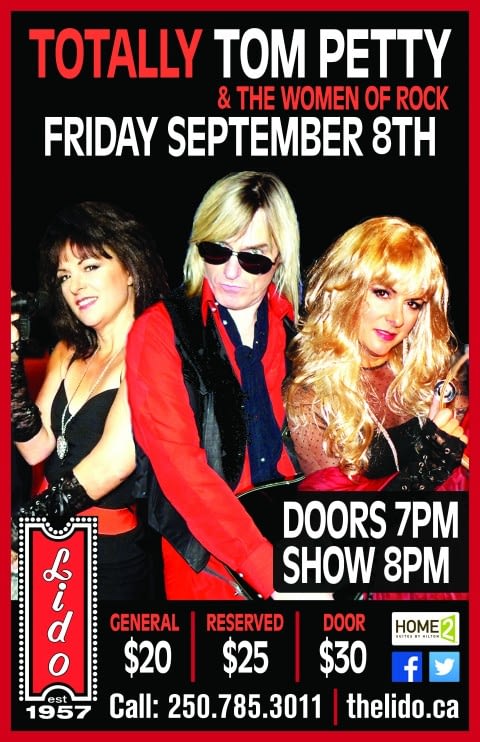 We arrived safely in Fernie BC! Looking forward to Saturday Night at The Northern Bar and Stage.

Here is our latest newspaper write=up from Osoyoos Today for our show
TOTALLY TOM PETTY HOSTS THE WOMEN OF ROCK, at THE FRANK VENABLES THEATRE, OLIVER BC:

Imagine Tom Petty, Stevie Nicks, Pat Benatar and Chrissie Hynde of The Pretenders all on one stage — how much would you pay for all of that?

Yeah, forget it, right — it’s not going to happen.

This Saturday, the Frank Venables Theatre in Oliver has the next best thing — a world-class tribute to four of the biggest stars of the ’70s and ’80s — in Totally Tom Petty Hosts the Women of Rock.

But there’s more. Petty hits the stage with the three famous women rockers, all portrayed by Linda Maze.

“I’ve been singing a long time and I’ve sang their songs in bands for a long time,” said Linda Wednesday evening. “This is taking it a step further — this bumps up the entertainment value for people to actually feel like their experiencing the real McCoy.

Ms. Maze is a singer-songwriter with three original albums to her credit. But she loves playing a starring role in husband Phil’s show, which has survived almost five years of touring across Canada and the United States and extended stays in Las Vegas.

Phil, meanwhile, is noted as the premier Tom Petty tribute artist — at least in Linda’s heart.

“Our Tom Petty is really awesome,” she says of husband Phil. “In my mind, he’s the best Tom Petty tribute around.

“People are going to love the Tom Petty. A lot of time he does Tom Petty on his own, without the Women of Rock.”

“We don’t always do full-band shows . . . this time we’re having the full band. Everybody’s going to be there.”

The all-star performance has played large festivals across Canada and the United States.

Tickets for Saturday evening’s performance are $37 in advance and $40 the day of the show. All seats are reserved.

Tickets are available online and at the Venables Theatre Box Office Tuesdays, Wednesdays and Thursdays from 10 a.m. to 3 p.m.